We have some really talented women in the sisterhood.  Just for fun today, here are a few of my favorite (affordable) handmade goodies:

They’re not just for the front door.  Kristy’s wreaths are pretty and stylish.  I have a springtime one hanging in my dining room now.  The lavender, jade, and cream colors add new life to our home.  Check out her beautiful creations for yourself (or someone else): 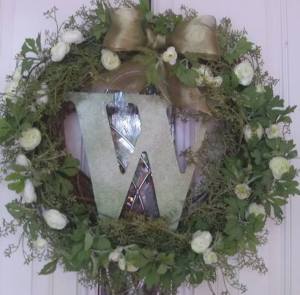 A handwritten note beats a text or email any day.  These cards can only be described as gorgeous.  Each one has unique details, harmonious colors, and a thoughtful message.  I personally love her lighthouse series.  Whether you want to thank a friend or let someone know you’re thinking of them, these pretty cards are the way to go.  They will give you as much pleasure as the one who receives them.

Made from the Heart

Essential oil users, you’re going to love this.  Amy makes necklaces and earrings for diffusing your favorite oils.  The jewelry holds little felt balls (in your choice of neutral colors).  My necklace arrived early this week.  I placed a couple of drops of soothing lavender on the felt ball and wore the necklace all day.  Even my sons enjoyed the scent.  They joked, “People will always feel good when they’re around you!”

From handbags and baby bibs to mugs and aprons, Erin can personalize just about anything for you.  Her work is fun and fresh.  Anyone would enjoy receiving a special gift from her shop.  I have a personalized key chain in a cheerful periwinkle blue that goes with me everywhere and makes me smile.

Country fresh and sweet describe Amanda’s paintings.  She uses water colors, acrylics, and mixed media.  I’m trying to decide between two of them for my office (see pics below).  If you are drawn to mason jars, and agree that “Some old-fashioned things like fresh air and sunshine are hard to beat” (Laura Ingalls Wilder), you’ll be enchanted by Amanda’s work. 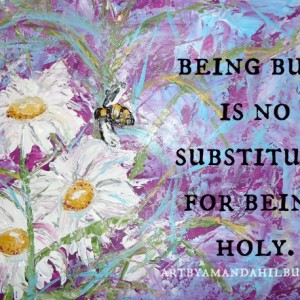 I think both of those would look charming in my office, don’t you?

Next time you need to buy a gift or would like to bring some beauty into your home, these lovely Christian ladies would love to have your support!

(I don’t get anything for sharing these links, monetary or otherwise.  I just think they’re grand!)

Every interaction I’ve had with Renita Archey has left me smiling.  She is delightful, and I was thrilled when she agreed to an interview.  True to her transparent nature, she shares about herself in a warm and real way.  Grab a refreshing drink and enjoy this chat with a fun-loving Christian woman.

Renita, please tell us a little about yourself.

Renita:  I am a lifelong Tennessean and an only, and slightly spoiled, only child. I was blessed to be raised in a Christian home with both sides of my family being faithful members of the Lord’s church. In fact, when I returned to my home congregation to speak at a ladies day they asked everyone who was related to me to stand. My Mom, six aunts and two or three cousins were in the audience.

I graduated from Freed Hardeman and returned to East Tennessee (you can only return to Tennessee from Tennessee if you live here and understand that East, Middle and West Tennessee are each considered their own state) to work in local radio. But then, at a Wednesday night bible study I met a young, handsome man by the name of Jeff Archey. One year later we married. We have enjoyed 27 wonderful years this April.

I work in the CEO office of the Volkswagen Chattanooga Manufacturing plant. I can literally say I have been here since dirt because I was hired before the plant was build and watched the facility come to life during my first three years of employment.

Congratulations on your upcoming anniversary!  As a speaker, your lessons are always Word-filled and practical. What are some lessons you think we need more of today?

Renita:  No matter how old we are, a good reminder of the basics is never out of date. We can draw something new from those words we have studied many times, and I think we are strengthened every time. That is especially true as our nation appears to be making so many of the same mistakes the Israelites made as a nation. Drawing those parallels are very important reminders. It is also necessary to keep reminding ourselves of the basics because, unfortunately, as we look around our congregations, it is sometimes very evident that they are not being put into practice in our everyday lives. We see immodest apparel at worship services or our members posting in social media about ungodly activities in which they are participating.

From the very first time I met you, I’ve been drawn to your sweet spirit. To what can attribute your peaceful demeanor?

Renita:  I am not sure if those who live with me on a day to day basis would call me peaceful. This morning I was sitting at the foot of my dad’s hospital bed watching him sleep and I thought of how practical, patient and even tempered he is. I have never seen him lose his temper. He always has practical advice to give, and has handled many difficult situations with wisdom and grace. That life-long example is where I hope I get my spirit. I hope I can be half as effective as my parents have been in the Kingdom.

What a blessing to have that kind of example from your father!  He will continue to be in my prayers.  Is there something you’d like to share about yourself that others might be surprised to know?

Renita:  I am a pretty meat and potatoes type of girl. There is not much surprising about me. Jeff thinks it really cool that I was able to interview a couple of Presidents of the United States of America during my time as a news reporter, and it was neat…but I don’t know…I would rather someone say it surprised them to know I am 53 years old.

Jeff is right!  What’s your favorite thing about being a preacher’s wife?

Renita:  I think it would have to be the opportunities I am given at work. Most people call themselves “Christians” but because they call me “the preacher’s wife” many times co-workers come to me with Bible questions or with an issue in their life where they need help. I don’t believe I would be able to have as many bible studies over lunch without that “title”. Right now two ladies that I work with are attending my ladies’ class at the Chattanooga School of Preaching and Biblical Studies. It opened the door to an in-depth study on the role of women leaders in the church. Another co-worker approached me when her daughter came home talking about “a young earth”. She had never heard the term before and we studied for several weeks. I also cannot remember the number of times two of us have retreated to the restroom for a session of prayer over a specific issue they were facing. I pray that the small seeds planted each day bear fruit in the years to come.

Renita, I think that’s one of the best answers I’ve ever been given.  I love your soul-winning attitude about the “title,” when so many preachers’ wives seem to resent it.  Keep up the great work! What’s your go-to company meal?

Renita:  Well…I am more likely to take you a mile down the road to a local “meat and three” we frequent than offer to cook for you . It is a quiet place most days where you can easily talk, and then we go back to the house for dessert. If I really need to fix something at home it will be easy like a large pan of lasagna and salad. One of our members once told me it was a sin that I had such a nice kitchen since I didn’t know how to use it.

Ha!  Sounds like fun!  Would you mind sharing one of your favorite books with us?

Renita:  I love to read…there is nothing I enjoy more than curling up with a good book. I love workbooks and commentaries and lectureship books. But I am guessing I have read Daughters of Eve by Lottie Beth Hobbs a dozen times and Heart Bouquet by Louise Barnett Cox almost that many.

Thank you, Renita.  Time spent with you is always refreshing.  May God bless you abundantly as you continue to shine for Him!

I crave that, don’t you?  I long for conversations without devices.  Just a few minutes of uninterrupted connecting.  Of having someone’s eyes looking at my face for just a little while without sneaking a peek at their phone.  I’d like to walk into a room and see people interested in one another instead of hooked like an IV to their own digi-world.

There’s always a good reason for holding our devices so close.  We’re waiting for answers to queries or reports from our kids.  We’re checking in for flights or checking the stats on an order.  We’re posting pics to document the moment.

There are lots of efficient and cool things we can be doing, but do we really have to do them when we’re with real people?  Is whatever we’re checking or doing that essential?  More often than not, it’s not.  When there’s a five second lull in the conversation, that seems to be the cue to whip out something of more interest.  And sometimes there isn’t even a lull.  Sometimes the device comes out smack dab in the middle of a sentence.

This might label me old-fashioned, but I can’t help but think it’s just rude.  And yes, I’m guilty.  Maybe it bothers me now because I’m getting older and more aware of how quickly time is passing.  Which is more precious–face to face interaction with loved ones or face to device time?  Which will we look back on and wish we’d spent more time doing?

Unplugged attention is a form of respect.  It tells others we think they’re important and we want to make the most of our time with them.  It allows us to enjoy the full experience of communication and interaction.  It prevents us from missing out on body language cues or what’s going on around us.

I came across a sobering quote:  “You will never have this day with your children again” (Jan Hatmaker).  When it comes to time with our children or our spouses or our church family, we are squandering precious moments when we are only partially engaged. 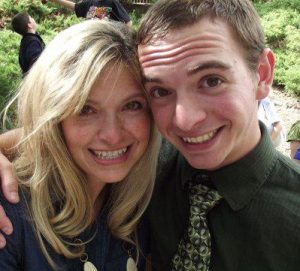 “I said a little prayer this morning for you to have a great day.”

These simple words by Kristy Huntsman stayed with me for days.  She posted them on my Facebook wall, and the for-no-special-reason encouragement made me smile every time I thought of it.  She prayed to the Father on my behalf!  I felt loved and strengthened.

A little prayer has a lot of power.

These truths about prayer remind me of a few things.  First, I should never take an offered prayer for granted.  It’s a meaningful and mighty gesture.  Second, I should follow through when I offer to pray for others.  It’s so easy to say, “I’ll pray for you.”  It takes intentional diligence to actually do it.  And third, I should offer to pray more.  There are needs and hurts and fears, and I can definitely pray in those situations.  But I can also offer a prayer on your behalf when there’s no special reason.  What a blessing God has given us!

“I thank my God in all my remembrance of you, always in every prayer of mine for you all making my prayer with joy”  (Phil. 1:3,4).