Revive Me, Week 48–A Year of Growing Stronger in the Lord

I’m fighting distraction.  I’ve been focused on whatever my current responsibility has been.  When I could check off that assignment or event, my focus would move on to the next one.  Yesterday during the Lord’s Supper, I was about to put the fruit of the vine to my lips when it dawned on me that my mind had completely wandered all through the partaking of the bread.  I lifted my head as I realized I couldn’t recall one single sentence mentioned in either prayer that had just been offered.

Paul lifted up the cross as his central focus.  For him, nothing else mattered.  “And when I came to you, brethren, I did not come with superiority of speech or of wisdom, proclaiming to you the testimony of God. For I determined to know nothing among you except Jesus Christ, and Him crucified” (1 Cor. 2:1,2).  I can see that I need to clear away the clutter and focus on the cross:

It is so easy to get pulled away.  When I wander off on my own, I need to revisit Calvary.  The purpose of the cross was to bring me to God (1 Pet. 3:18).  Jesus gave everything for me there and that should be the reason for everything I do here.

“He died for all, so that they who live might no longer live for themselves, but for Him who died and rose again on their behalf” (2 Cor. 5:15).

Suggestions for the Week:

Imagine my surprise when I walked into the kitchen and discovered my pizza dough had turned into a yeasty volcano.  I didn’t intend for the dough to rise more than an hour, but I got so busy doing other things, I completely forgot all about it.  I’ve made pizza dough dozens of times.  When I made this particular batch, I did everything right.  When I set it on the counter to rise, it looked good and smelled good.  But because I got distracted, what started out as a “good thing,” turned into a mess.

Poor Martha.  She started out doing something good by welcoming Jesus into her home.  But then she jumped into busyness and next thing you know, things weren’t going the way she envisioned.  We might be quick to come to her defense.  After all, the food wasn’t going to prepare itself!  But Jesus cut to the heart of the matter.  “Martha, Martha, you are worried and bothered about so many things” (Luke 10:41).  The text tells us that Martha was distracted (v. 40).   When Martha became distracted…

She became frustrated.  I can almost hear her tone of voice when she finally asked Jesus to make Mary help her.  We’ve all been in situations where it seems there’s so much to do and too little help.  As Martha’s frustration mounted, she started feeling sorry for herself.  Her attitude soured.  She started complaining.  Martha, Martha, “be hospitable to one another without complaint” (1 Peter 4:9).

She started viewing others harshly.  Notice how Martha accused both her sister and her Lord.  She said her sister left her to do all the serving alone (Luke 10:40).  I wonder how many times she cut her eyes in her sister’s direction as she was working away?  She probably thought her sister was just being lazy, or at the very least, enjoying their special company while poor Martha was left with all the work.  Then she said to Jesus, “Lord, do You not care…?” (v. 40).  That question alone is proof positive that distractions are dangerous.  If she was in her right mind, would she have dared accuse the Messiah of not caring?  When we get overwhelmed by the extra responsibilities we take upon ourselves, we might lash out at those closest to us.  Jesus generously gave His time to Martha, but she couldn’t see that.  Mary was listening at Jesus’ feet (the implication being that He was teaching), not trying to get out of work, but Martha didn’t see it that way.  Martha’s perception of both Jesus and Mary was wrong.  How do we know she was wrong about Mary?  Because Jesus said, “Mary has chosen the good part, which shall not be taken away from her” (v. 42).   Distraction led Martha to treat others unjustly.  Martha, Martha, “with all humility and gentleness, with patience, show tolerance for one another in love” (Eph. 4:2).

She focused on the physical instead of the eternal.  And as a result, she missed out on a golden opportunity.  If Martha had sat at Jesus’ feet, she wouldn’t have been just a face in the crowd.  Jesus taught the multitudes many times.  But this time, He was in Martha’s home.  She could’ve had a special audience with the Son of God!  Martha wasn’t out doing worldly things or sinful things; she was serving.  But Jesus said she had “many things” on her mind when she should have had “one thing” on her mind (v. 41,42).  Martha chose poorly.  Because she was distracted by the urgent, she wasn’t focused on the eternal.  Martha, Martha, “set your mind on the things above, not on things of the earth” (Col. 3:2).

Prayer for Today:  Lord, help me focus on what’s truly important instead of being blinded by busy distractions. 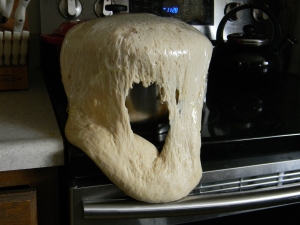